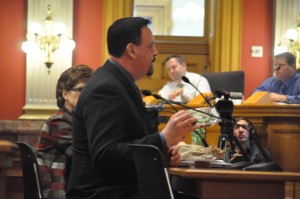 While she was here she interviewed various individuals, including me, to get a wide perspective on how medical marijuana was doing in Colorado and whether or not it would be good for Arkansas.

Not one to miss an opportunity to use the media to spread Reefer Madness far and wide, Sgt. Jim Gerhardt of the North Metro Drug Task Force proceeded to tell fictional tales of psychotic teens and increased traffic fatalities all to illustrate the evils of medical marijuana in Colorado.

“We’re making more arrests for marijuana related crimes than we did five years ago,” says Sergeant Jim Gerhardt. “Because it’s so out of control here.”

“There are huge huge gaps in the regulatory scheme,” he says.

A recent sweep by law enforcement found more than 100 cases where medical marijuana was grown in legal facilities had been diverted for illegal use.

According to Gerhardt, having marijuana on hand is making the streets less safe.

“Daily we’re seeing incidents where people are driving under the influence of marijuana getting into serious accidents, even causing fatalities,” he says.

They have also seen problems with kids who discover their parents’ edible pot products that resemble popular candies.

Less than a month ago, two 19 year olds sparked an investigation into possible marijuana psychosis, a negative reaction to regular marijuana that can sometimes turn deadly.

“One of them went into his home and stabbed himself 17 times one of the stab wounds went through his heart and killed him,” says Gerhardt.

While he can’t ignore the compassion he feels for those who turn to pot to relieve their pain, Sergeant Gerhardt isn’t sure the benefits outweigh the burden for society.

“You can’t help but say, ‘yeah it makes sense from that limited perspective,'” he says. “Are enough people going to be helped to outweigh the problems it’s going to cause to everybody else? I think in Colorado, my assessment is it has not.”

I did. I’ve got the Google.

Contrary to Gerhardt’s fantastic tale, I could find no report of a teen who “stabbed himself 17 times [until] one of the stab wounds went through his heart and killed him.” I thought maybe he got confused and he was talking about Spice (often called synthetic marijuana), but I couldn’t find a report related to that either. Surely, had something like this actually happened in Colorado the media would have heard about it, right? Apparently not.

Now I did find data regarding marijuana and traffic fatalities. But first, let’s look at an example of how the information is typically spun by the anti-drug forces:

According to a recent study of marijuana use and car accidents, fatal crashes involving people who were stoned have tripled over the last 10 years. The report, published in the American Journal of Epidemiology, found that the incidence of car crash victims with pot in their systems jumped from 4.2 percent in 1999 to 12.2 percent in 2010.

What’s at issue here, and what we find time and time again, is the assumption that having “pot in their systems” (or THC on board, as I’ve heard law enforcement say it) is proof enough that they were “stoned.” Unlike alcohol and illicit drugs, THC (the stuff that makes you “high”) is metabolized and stored in body fat. It’s metabolites are released into the blood stream over time. So someone could test  positive for THC in a drug test from use days or weeks before, and not have any impairment whatsoever.

In another piece from KARK, Gerhardt claims that “some marijuana users have reported a ‘high hangover’ when they run out, which officers believe could be connected with a number of child abuse cases because ‘they’re in a recovery period and discipline goes too far.” So essentially, because you’re either high when you’re on it or suffering from a high hangover when you’re not, if you consume marijuana for any reason, you’re incapable of caring for your kids. Marijuana consumers are bad parents. Period.

Cops can pretty much say anything to the media and get away with it. They’re rarely ever called on the carpet and asked to cite their sources. So when Gerhart talks about “100 cases where medical marijuana was grown in legal facilities” being diverted for illegal use, or “we’re making more arrests for marijuana related crimes than we did five years ago,” no one questions it.

Ultimately, Gerhardt’s disinformation and outright lies were successful. The Arkansas Medical Marijuana Question of 2012 lost by less than 2 percentage points: 51.44 to 48.56.

How much effect this series of news stories had on the outcome of the election, we’ll never know for sure. But had Sgt. Gerhardt lived up to his ethical duty to be honest and truthful instead of lying to the voters of Arkansas, or had the media bothered to do a little real journalism and fact-check this story instead of assuming that cops don’t lie, sick patients in Arkansas might have safe legal access to medical marijuana right now.