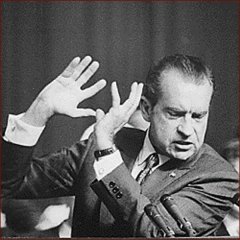 The Controlled Substances Act and the War on Drugs is a complete sham, and has been from the very beginning.

Over a decade ago, when the Nixon tapes came out, we saw that the foundation of the War on Drugs was built entirely upon the tyrannical political motivations from a paranoid sociopathic president. We’ve even got the tapes to prove it. And yet, The War continues.

The following article published in 2002 in Alternet could have been written today. Here’s a reminder of why marijuana is really Schedule 1 and how it got that way.

Once-Secret “Nixon Tapes” Show Why the U.S. Outlawed Pot
Lumping marijuana, homosexuality, Jews and Commies into one grand conspiracy, a paranoid Richard Nixon launched America’s “war on pot” 30 years ago. Here are the tapes to prove it.

March 20, 2002 | Thirty years ago the United States came to a critical juncture in the drug war. A Nixon-appointed presidential commission had recommended that marijuana use not be a criminal offense under state or federal law. But Nixon himself, based on his zealous personal preferences, overruled the commission’s research and doomed marijuana to its current illegal status.

This newly revealed information comes from declassified tapes of Oval Office conversations from 1971 and 1972, which show Nixon’s aggressive anti-drug stance putting him directly at odds against many of his close advisors. Transcripts of the tape, and a report based on them, are available at www.csdp.org.

Congress, when it passed the Controlled Substances Act in 1970, temporarily labeled marijuana a “Schedule I substance” — a flatly illegal drug with no approved medical purposes. But Congress acknowledged that it did not know enough about marijuana to permanently relegate it to Schedule I, and so they created a presidential commission to review the research and recommend a long-term strategy. President Nixon got to appoint the bulk of the commissioners. Not surprisingly, he loaded it with drug warriors. Nixon appointed Raymond Shafer, former Republican Governor of Pennsylvania, as Chairman. As a former prosecutor, Shafer had a “law and order,” drug warrior reputation. Nixon also appointed nine Commissioners, including the dean of a law school, the head of a mental health hospital, and a retired Chicago police captain. Along with the Nixon appointees, two senators and two congressmen from each party served on the Commission.

The Shafer Commission — officially known as the National Commission on Marihuana and Drug Abuse — took its job seriously. They launched fifty research projects, polled the public and members of the criminal justice community, and took thousands of pages of testimony. Their work is still the most comprehensive review of marijuana ever conducted by the federal government.

After reviewing all the evidence, these drug warriors were forced to come to a different conclusion than they had at first expected. Rather than harshly condemning marijuana, they started talking about legalization. When Nixon heard such talk, he quickly denounced the Commission — months before it issued its report.

As a result of Nixon’s public rebuke, Shafer met with the President. The Commission was upset, and the purpose of the meeting was to reassure them. But Nixon didn’t budge. Instead, he warned Shafer to get control of his commission and avoid looking like a “bunch of do-gooders” who are “soft on marijuana.” He warned Shafer that the Commission would “look bad as hell” if it came out with recommendations different from the direction of Congress and the President.

During their meeting, Shafer reassured the President that he would not support “legalization,” even though there were some on the Commission who did. He told Nixon they were looking for a unanimous recommendation. Nixon warned Shafer that he “had very strong feelings” on marijuana. Nixon and Shafer also discussed Shafer’s potential appointment to a federal judgeship.

But in the end, the Shafer Commission issued a report that tried to correct the “extensive degree of misinformation,” to “demythologize” and “desymbolize” marijuana. They reported finding that marijuana did not cause crime or aggression, lead to harder drug use or create significant biochemical, mental or physical abnormalities. They concluded: “Marihuana’s relative potential for harm to the vast majority of individual users and its actual impact on society does not justify a social policy designed to seek out and firmly punish those who use it.”

The most important recommendation of the Commission was the decriminalization of possession or non-profit transfer of marijuana. Decriminalization meant there would be no punishment — criminal or civil — under state or federal law.

Nixon reacted strongly to the report. In a recorded conversation on March 21, the day before the Commission released its report, Nixon said, “We need, and I use the word ‘all out war,’ on all fronts … we have to attack on all fronts.” Nixon and his advisors went on to plan a speech about why he opposed marijuana legalization, and proposed that he do “a drug thing every week” during the 1972 presidential election year. Nixon wanted a “Goddamn strong statement about marijuana … that just tears the ass out of them.”

Shafer was never appointed to the federal court.

Nixon’s private comments about marijuana showed he was the epitome of misinformation and prejudice. He believed marijuana led to hard drugs, despite the evidence to the contrary. He saw marijuana as tied to “radical demonstrators.” He believed that “the Jews,” especially “Jewish psychiatrists” were behind advocacy for legalization, asking advisor Bob Haldeman, “What the Christ is the matter with the Jews, Bob?” He made a bizarre distinction between marijuana and alcohol, saying people use marijuana “to get high” while “a person drinks to have fun.”

He also saw marijuana as part of the culture war that was destroying the United States, and claimed that Communists were using it as a weapon. “Homosexuality, dope, immorality in general,” Nixon fumed. “These are the enemies of strong societies. That’s why the Communists and the left-wingers are pushing the stuff, they’re trying to destroy us.” His approach drug education was just as simplistic: “Enforce the law. You’ve got to scare them.”

Unfortunately, Nixon did more than just “scare them,” whoever they were. His marijuana war rhetoric led to a dramatic increase in arrests. One year after his “all out war” comments, marijuana arrests jumped to 420,700 a year — a full 128,000 more than the year before. Since then, nearly 15 million people have been arrested for marijuana offenses.

For thirty years, the United States has taken the path of Nixon’s prejudice and ignored the experts. We now have the largest prison population in world history, and drug problems are no closer to solved. Indeed, plenty of evidence indicates that drug-related problems are worse than ever.

It did not have to be this way. At the same time that the Shafer Commission issued its report, the Bain Commission in Holland issued a report that made similar findings and recommendations. In Holland, they followed the advice of their experts. Thirty years later Holland has half the per-capita marijuana use as the U.S., far fewer drug-related problems and spends much less on drug enforcement. With statistics like that, it’s no wonder that most of Europe is going Dutch. Just last week a British Commission issued a Shafer-like report, indicating that the U.K. is moving in the Dutch direction.

Read the rest of the original article at Alternet.