Angela Williams: Explain your vote against the marijuana for PTSD bill 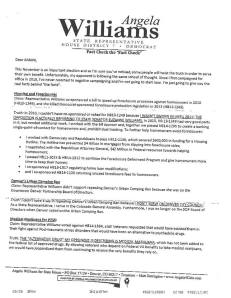 I know some of my Dem friends will be upset with me, but I simply can’t support Colorado Rep. Angela Williams’ bid for re-election. There are a number of points where we disagree, but I’ll focus on one key issue: marijuana and PTSD.

A friend recently sent me a copy of a letter Rep. Williams sent to her constituents addressing some of the claims made by her opponents. In that, she tries to explain her vote against the bill that would have added PTSD to the list of qualifying conditions to obtain a medical marijuana license.

Here is the claim and her reply, directly from her letter:

Medical Marijuana for PTSD
Claim: Representative Williams voted against HB14-1364, a bill Veterans requested that would have assisted them in their fight against Post-traumatic stress disorders that would have been an alternative to psychedelic drugs.

Truth: THE “ALTERNATIVE DRUG” MY OPPONENT IS DESCRIBING IS MEDICAL MARIJUANA, which has not been added to the federal list of approved drugs. By allowing veterans who depend on Federal VA benefits to take medical marijuana, we would have jeopardized them from continuing to receive the very benefits they rely on. 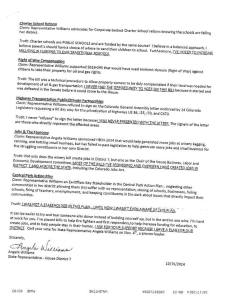 I don’t know what hearing Rep. Williams was sitting in, but it certainly wasn’t the same one I was in.

I watched veteran after veteran, among many others, step up the microphone to explain how this would actually protect them from losing their VA benefits and access to care. That the system, as it is now, forces them to lie about their condition. That they’d much rather be able to discuss their marijuana use for PTSD with their VA doctors. That the VA has issued a statement saying that veterans would not lose benefits if they were using “medical marijuana in a manner that was consistent with state law.”

I invite Rep. Williams, or one of her supporters, to explain her vote on HB14-1364 in a way that doesn’t make her sound either disingenuous, disinterested or disengaged.

Full disclosure: I do not live in her House District, so I am not one of her constituents. Couldn’t vote for her even if I wanted to.

Like Loading...
‹ Beyond marijuana candy: Real tips for safe Halloween trick-or-treating (Video)
Keep Pharma away from my medicine! (Video) ›