2014: The Year of Marijuana Edibles 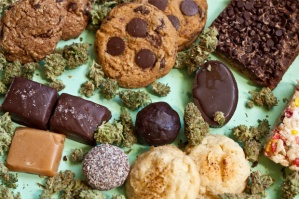 I’ve thought a lot about the events of the past year and it seems to me that there was a single issue that dominated news reports about marijuana in Colorado during 2014: edibles.

After all the celebrations and long lines at retail marijuana shops on January 1, it didn’t take long before the first negative marijuana story of the year made its way into the news cycle. A Longmont toddler tested positive for THC after her mom said she ate a cookie she had found in the yard outside. Of course, she was rushed to the emergency room, and the media immediately took notice. Was Amendment 64 threatening the safety of our children?

The marijuana community was suspicious from the start, and rightly so. Why would a mother allow her 2-year-old to eat a cookie she found on the ground outside? Why wouldn’t she try to save a piece of the cookie for testing if she was concerned? And who would leave a marijuana cookie just lying around in this woman’s yard in the first place?

There was never any resolution to the story. No answers to our burning questions. But it was the beginning of what would come to dominate the marijuana conversation for 2014: edibles.

In March, we got the tragic story of Levy Thamba, a 19-year-old student from Wyoming who ate a marijuana cookie and jumped to his death. The coroner listed “marijuana intoxication” from cannabis-infused cookies as a significant condition contributing to the death. His THC blood level was 7.2 nanograms. The SMART moms went wild!

In April, Richard Kirk held a gun to his wife Kristine’s head and pulled the trigger, supposedly because he was hallucinating after eating a marijuana cookie. It was later revealed that Kristine Kirk was covered by a $340,000 life insurance policy and that the couple’s marital and financial problems were escalating. They had been fighting quite a bit in the days leading up to the murder. Kirk had enough of his wits about him to unlock the gun safe and then ask his 7-year-old son to shoot him so he could be with mommy. All this blamed on marijuana.

The State Legislature was so concerned about these incidents that they passed a bill requiring the Marijuana Enforcement Division to set up a working group to figure out a way to mark edible products infused with marijuana. They also passed new requirements for serving size (10mg), labeling and packaging, all to protect the public (and the children!) from the dangers of marijuana edibles.

In May, Dr. Wang with Children’s Hospital reported that it had seen 9 children in its ER for accidental marijuana ingestion. However, during one of the later Edibles Working Group sessions, Dr. Wang stated that they hadn’t seen any accidental ingestions since the first part of the year. Apparently, adults were learning what “keep out of reach of children” means.

July brought us the notorious Full Melt debacle at the Denver County Fair where members of the public visiting the new cannabis exhibit were accidentally dosed with infused chocolate. The media ate it up as victims came forward, lawsuits were filed, and fingers were pointed.

October brought us more Reefer Madness from the SMART Colorado and the Denver Police Department as they launched campaigns including billboards and news stories warning parents of the danger of marijuana candy ending up in their kids’ Trick-or-Treat bags. Guess what? No reports of marijuana edibles handed out on Halloween, not that there was ever any real danger of that happening in the first place. Urban legend.

Throughout the summer and fall, the MED’s Edibles Working Group battled it out, trying to come up with a way to mark edibles “where practicable.” All sorts of recommendations were made, from adding sparkles or smell to finding a “special” color just for marijuana. One from the CDPHE would limit all edibles to hard candy and tincture only. In the end, there was no real solution that would distinguish all infused edibles from other ordinary products.

So where does this leave us going into 2015?

The battle over edibles will be returned to the Legislature, this time including a variety of recommendations from the Working Group. Again, how they’ll choose to deal with that issue, I don’t know yet. But you can be sure that they will do something.

There are some other pretty big marijuana-related issues we can expect to see addressed in the coming Legislative Session. The sunset review of the medical marijuana code will produce new legislation. There will also be attempts to address concerns around BHO production, caregivers, doctors, taxes and more.

So if you care about any of these issues, now is the time to get active. The 2015 Legislative Session starts Wednesday, January 7, and continues for 120 days.

See you at the Capitol!