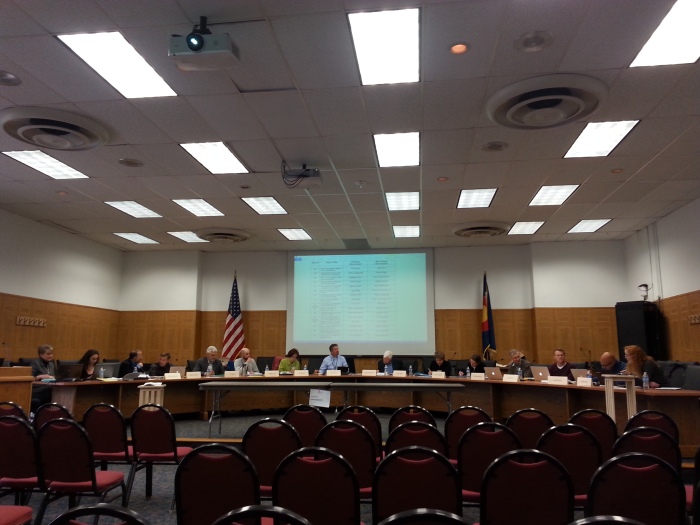 On Friday morning, the Scientific Advisory Council met to discuss the status of the research grants that had been funded as well as the responsibilities of the SAC going forward. A couple of interesting things happened that most folks probably aren’t aware of.

At the previous meeting on April 10, the SAC discussed and made a recommendation to the Board of Health regarding a petition to add Post Traumatic Stress Disorder (PTSD) to the list of qualifying conditions for medical marijuana in Colorado. On Friday, the minutes of that meeting, including the debate over PTSD, were discussed and approved.

Although there is no audio recording, the minutes provide an enlightening overview and insight into the debate over the use of medical marijuana for PTSD and its addition to the list in Colorado. Keep in mind that since Amendment 20 passed in 2000, and although the Board of Health has been petitioned several times (4 times for PTSD), not a single condition has been added to the list of qualifiers. For more information, please click here.

In reading over the minutes, you can see how having a patient representative on the Council (Teri Robnett with Cannabis Patients Alliance) to ask important questions, challenge the status quo, and advocate for the needs of patients, made a difference in the outcome.

In the end, the SAC recommended that the Board of Health add PTSD to the list for medical marijuana.

At their May 15 meeting, the Board of Health agreed to take the petition and recommendation to a public hearing for discussion and a decision. That hearing will be held on Wednesday, July 15, starting at 10:00 a.m. at the Colorado Department of Public Health and Environment (CDPHE).

I. Overview of the “Evidence Base to Assess the PTSD Petition” by Ken Gershman (please refer to the document “SAC slides for 4-10-15” available online).

I. Need for co-occurring psychotherapy discussed. Recognized that not all veterans have equal access to the psychotherapy.

II. Prescribed purposes and availability of Nabilone and Marinol discussed.

III. Weighing the benefits of marijuana against the harms discussed.

IV. Discussed the need for more inclusive studies, specifically interviews with spouses of persons with PTSD.

V. Dr. Cohen stated that his patients have reported that they are benefited by marijuana. He feels that marijuana does work for PTSD. He has seen many PTSD patients and feels PTSD is very prevalent in the population. He believes the different types of marijuana, and the individual cannabinoids need to be researched.

VIII. Discussed the potential problems veterans face with their VA benefits as it relates to using marijuana.

IX. Discussed the issue of patients’ willingness to be honest with their physicians regarding marijuana use.

X. Discussed weighing the potential patient benefits that marijuana could offer over the perceived risks, and in comparison to the side effects of FDA approved PTSD drugs.

XI. Question raised as to whether the council would be doing harm by denying PTSD patients access to medical marijuana. Discussed.

XII. Discussed concerns about marijuana not having gone through the rigorous FDA drug approval process that all prescription medications must go through on the federal level.

XIII. CDPHE terms for denying the petition reviewed. Discussed in context of other medications and medical practices.

XIV. SAC will incorporate the evidence from the published literature, ethics of patient honesty and the psychological wellbeing of patients in this decision.

XV. The individual component parts of marijuana (such as CBD) do not apply to this decision.

XVIII. Dr. Cohen stated many of his patients using marijuana for PTSD return annually because of its efficacy. Approving medical marijuana for PTSD is a good idea in his opinion so this PTSD population may be studied. Pointed out nobody has been harmed with marijuana use, unlike alcohol use.

XIX. Discussed research studies; the lag time and the two PTSD studies that were recently funded by CDPHE that are being held to the standards of the Board of Health Rules.

XX. Discussed the possibilities of a re-classification of marijuana by the Federal Drug Enforcement Agency (DEA).

b. Marijuana is not a magic “pill” but rather should be part of a PTSD treatment plan.

c. Many medical marijuana patients are not receiving complete care or treatment that they should (just a one-time per year visit to the doctor to receive a renewed prescription).

d. We don’t want to mislead patients or providers; this is an imperfect system.

f. If or when PTSD is added to the list of conditions, it will become difficult to remove should more research become available with evidence that suggests marijuana is not effective for treating PTSD.

XXIII. Discuss complexities and caveats of approval, including making the approval “time-limited”.

I. Consensus poll taken on whether SAC members recommend CDPHE to approve or deny the petition to add PTSD to the list of medical marijuana conditions.

III. SAC members may or may not use CDPHE’s criteria to aide in their decision.

Decisions are not binding.

IV. Consensus Poll 1; Whether or not to add PTSD to list of Medical Marijuana qualifying conditions? Results: Yea=7, Nay=3.

V. Consensus Poll 2; If PTSD is added, should it be conditional (suggestions included; temporary-add, follow examples of other states, incorporate with treatment plans/documentation, re-review of literature to incorporate new research, develop a prescriber-community standard to treat PTSD) or unconditional? Results: 3 conditional, 5 unconditional, 2 abstained.

VI. SAC decision is a recommendation to CDPHE only.

VII. CDPHE and Dr. Wolk have much to consider; the SAC’s vote, discussions, conflict, and ethical issues.

VIII. SAC will be notified when a decision is made.

IX. Thanks given to the SAC on behalf of patients and veterans.

The SAC voted to amend the bylaws and remove the responsibility of reviewing petitions to add conditions to the list for medical marijuana. Why? Because the Office of Legislative Legal Services (OLLS) said so.

SB14-155, the bill that established the grant program and the SAC, doesn’t grant them the authority to review petitions. That was something the CDPHE added to the responsibilities. In light of that lack of statutory authority, the SAC was forced to withdraw the official responsibility of reviewing petitions and leave it to an ad hoc committee that may or may not include members of the Committee.

That means, without the legislature granting the authority to do so in the future, the petition to add PTSD may be the only petition ever officially reviewed by the SAC in an open and public forum with a patient advocate involved in the debate. The only reason this one slipped through was because it came in and was already in process before the OLLS stepped in.

Your help is needed!

We need your help to get PTSD added to the list of qualifying conditions for medical marijuana in Colorado. Please visit this post for more information on what you can do NOW to move this effort forward.

As you can see, having a voice for patients involved in these discussions is critically important. Cannabis Patients Alliance is that voice. Since 2012, we have been at the forefront of every policy decision affecting medical marijuana patients in Colorado. We need your support! Please, DONATE NOW or BECOME AN ALLY so we can continue this important work.

Like Loading...
‹ Cannabis patients, family, and the public! We want your opinion!
6 reasons to add PTSD to the medical marijuana list now that we have recreational ›