Home › Family & Relationships › Children, Teens & Youth › The pain and fear of parenting a child with epilepsy

The pain and fear of parenting a child with epilepsy

On December 1, 2015, my friend Brian Wilson wrote this beautiful and touching tribute to Sabina Rose Joana, a young child who lost her battle with epilepsy. His thoughtful account of the constant fear hanging over every patient and every parent because of this disease moved me to tears. We’re honored that he allowed us to share it here.

The Wilson family: Brian and Meghan with daughters Adele and Vivian

I’d like to offer my apologies in advance to all those who’ve lost a loved one to epilepsy. I write this to both deal with the issue myself, but also to hopefully provide hope & inspiration, and to help those who are several degrees removed really understand what parents and patients in the epilepsy community face on a daily, no, hourly basis. I’m not proofreading this, because I don’t think I can read it when I’m done.Many people who have epilepsy die. It’s a fact we all live with. If you’re a part of the community, a shitty membership, you see names of children whose stories and progress you’ve followed, pass on. No matter what’s going on in your day, when you hear the news, you just stop and sink below the surface for a while. And then there’s that terrible though, “This was not my child, but she’s got a number that’ll be called sometime.”

Two years ago was the hardest one for us. I say this realizing fully how hard it was for the family impacted directly. Nothing can ever compare to that. I always secretly hope something happens to me before it happens to Vivian, because I don’t know how I’d get through it. Two years ago, Sabina Rose Joana was yet another casuality of this terrible disorder called Dravet Syndrome. It’s not the only catastrphic seizure disorder, but it’s the one we call home. What made Sabina’s passing tougher than all of the other children’s we’ve heard about is that we knew her parents, Philip Joana and Paula Fiorino Joana. They saw Weed and the Christie event, lived relatively close to us in NJ, contacted us and we quickly learned they’re our type of people. In a few brief weeks, we became friends. Sabina seemed to be doing so much better than Vivian. We felt they were so lucky. This is really hard to type.

These were two people who’ve faced challenges in their life greater then we could imagine. They overcame them with great strength and started a family, only to be rewarded with Dravet. It was a kick in the groin. However, Sabina, as her doctor put it, was on the mild side. If you’re not already familiar with Sabina’s story, she had a massive seizure and eventually died from it. I write this all with a lot of pain, but I still cannot imagine the pain Paula, Phil and Sabina went through. I almost feel like a fake writing this. But I know I’m not. This hit way too close to home.

I remember visiting the Joana’s in the hospital and looking at Sabina. I think I held her hand. She had to recover. Not only for the sake of our friend’s, but because this could be Vivian. Why Sabina and not Vivian? Why anybody’s child over mine? If this could happen to Sabina, it can certainly happen to Vivian, and she has to have the chance to get through it.

Those were the scariest moments of my life. Being the type of person I am, I couldn’t help playing through the scenario, over and over again, of that being my daughter instead of theirs. The worst part is that, statistically, I will be burying Vivian. This is what people have to understand. Anybody with a seiure disorder is at high risk of death. When that disorder is something like Dravaet or the other nasty ones, that risk increaes. My mom once said, trying to console me (I’m not trying to make you look bad mom), every parent is scared for losing his or her child through some unfortunate accident. I agree. As a parent, it’s always a concern. But, time for a pop culture reference. Hunger games. Every child has a lottery ticket. They’re all equal. In the Hunger Games, though, kids can get things, like more food, etc, for their family, in exchange for an extra ticket – an extra chance to go off and die. For epilepsy disorder parents, they know their kid has several extra tickets. It’s not just a matter of worring if there’ll be a shooting at their school, or if they’ll get hit by a drunk driver or any of the other parent worry scenarios. We all face the real spectre of SUDEP, death by a massive seizure, or death due to the side effects of seizures or fall down a flight of stairs or something when a seizure strikes. The odds are against these kids. 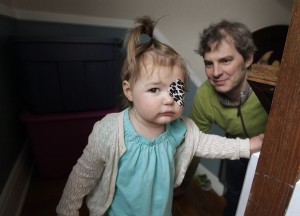 Brian Wilson with his daughter Vivian

I want to also point out, while I sob for myself, imagine what those afflicted with epilepsy go through. It’s much more than me feeling sorry for my condition. The life of an epileptic is rough. Via Facebook, I know a few who are fortunate enough to have an adult life. If I’m suffering as a parent, imagine what they go through in a daily basis. I just heard from a friend who suffers from epilepsy, that their friend, a 24 year old man named Jonathan, just died from epilepsy. If you have epilepsy, how do you deal with that? Do you have the strength to take life by the horns and ride it vigorously day by day, knowing this is your reality? Fortunately, those that I do know have this abilty. It’s a strength I hope I would have. I have it as a parent, but it’s not the same. I tip my hat to you all, hoping many of you are reading this.

I don’t blame Vivian for any of this. I don’t blame anybody. It was simply a misprint in RNA transfer. No matter what it was, though, there’s nobody to blame. All I want for Vivian is the best life she can have. That’s what dives me. That’s what drives Meghan. Lately, Adele, her sister, is also feeling that. Adele suffers this too. She’s a prisoner in an eplipsy family. It’s not fair to her, but it’ll make her an awesome person.

This all brings me back to Sabina. It’s not fair that she died, but it’s the reality we all live with. I wish I could do something to remove the suffering from the Joana’s, but I don’t think that’s possible. I just hope it provides some comfort that with Sabina’s passing, we’ve fought harder and harder to get Vivian what she needs and became even more resolute to giver her the best life she can possibly have while we have her.

Paula and Phil, I love you. I know that probably not a single day goes by where this doesn’t impact you. Yet you carry on. You’ve expanded your family and keep trucking on. You offer me hope and inspiration that when (not if) this happens to us, we can get through it, too.

Thank you Brian for allowing us to share this.

On Becoming an Activist – by Brian Wilson at Ladybud Magazine.

Cannabis Patients Alliance is working hard to change hearts and minds, one conversation at a time. We can’t do it alone. We need your support! Please, DONATE NOW or BECOME AN ALLY so we can continue this important work.